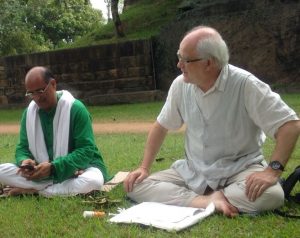 With Stephen Batchelor and Shantum Seth

From 16th – 30th January 2020, Stephen Batchelor will co-lead a pilgrimage to the ancient Buddhist monasteries of India alongside Shantum Seth.

This pilgrimage will take in some of the rare surviving sites in the Indian subcontinent where Buddhism flourished on its home soil from the 3rd Century BCE to the 10th Century CE. Sites include the world-renowned stupa at Sanchi, the rock-cut monasteries of Ajanta and Ellora, as well as lesser-known rock-cut temples, such as Pitalkora, Karla, Bhaja, Bedsa, Nasik and Kanheri. Exposure to such a wide-range of sites will grant a vivid and physical sense of where and how Buddhism evolved in India.

Although these monasteries are no longer active as places of learning and practice, many are in remarkably good condition. Not only will it be possible to enjoy the sheer physical beauty and solitude of many of these ancient sites, but also to have the unique experience of studying classical Buddhist texts and meditating in the places where these activities originated in India.

The pilgrimage includes two retreats: one with the Dalit Buddhists and one at Sanchi.

By travelling to locations that are off the tourist map, it will be possible to enjoy them in tranquility and at leisure, appreciating more fully the skill and artistic genius of those who built these inspirational edifices.

This journey is organised and run by Buddhapath.

As the promotional partner Bodhi College is delighted to be able to offer our newsletter subscribers 10 places on the journey for a special price of $6450 per person.

To book your place please contact  info@nullbuddhapath.com quoting the Bodhi College special offer. The places will be sold on a first come first served basis.

For more detailed information about the journey and Buddhapath please click here.

Dharmacharya SHANTUM SETH, an ordained dharma teacher in the Zen Buddhist lineage of Thich Nhat Hanh, is the foremost expert on sites associated with the Buddha and has been leading pilgrimages since 1988.  He has co-authored books such as Walking with the Buddha and been a consultant for films like BBC-Discovery’s Life of the Buddha and BBC-PBS’s The Story of India. He has been promoting mindfulness in education and with the police/para-military, and is also setting up a meditative practice centre in the foothills of the Himalayas through the non-profit Ahimsa Trust.