in collaboration with ‘Tricycle: The Buddhist Review’

This six-week online programme will explore in depth this foundational framework of the Buddha’s teaching from the perspective of early Buddhism. Drawing on the discourses of the Pali canon rather than later commentarial texts, we will give particular emphasis to the application of these teachings in today’s world. Equal attention will be given to the contemplative and ethical practice of these four truths.

Lesson 1 • The Four Noble Truths as a Framework for Practice 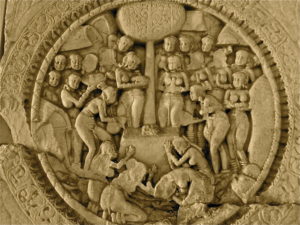 During this course, the Bodhi College core faculty will guide you through the early Buddhist teachings on the four truths, so you can explore how this core teaching can be interpreted and applied in today’s world. Through this, the personal perspectives of each teacher will be revealed, empowering you to develop your own understanding beyond any external interpretation or authority.

The invitation is to engage with the early teachings on the four noble truths in an alive and open minded way, rather than as static truths somehow separate from the cultural context within which they were first communicated, or as old teachings of diminished relevance in our age. As a result, we hope you will uncover how these teachings are directly relevant to your own life. Following the broadcast of each lesson, members of the faculty will be available to respond to comments and questions from participants via the online learning environment.

CHRISTINA FELDMAN is a co-founder of Gaia House and a guiding teacher at Insight Meditation Society, Barre, Massachussetts. The author of a number of books, she has been teaching insight meditation retreats internationally since 1976. She is one of the teaching faculty of the CPP programme, dedicated to the study and application of the early teachings of the Buddha and is engaged in teaching the Buddhist psychological foundations of mindfulness to those training to teach mindfulness-based applications in England, Belgium and the Netherlands. Christina's outside schedule

JOHN PEACOCK is both an academic and a Buddhist practitioner of nearly forty years. Trained initially in the Tibetan Gelugpa tradition in India, he subsequently spent time in Sri Lanka studying Theravada. He lectured in Buddhist Studies at the University of Bristol, is Associate Director of the Oxford Mindfulness Centre and teaches on the Master of Studies programme in MBCT (Mindfulness-based Cognitive Therapy) at Oxford University. John has been teaching meditation for more than twenty five years and is a Gaia House guiding teacher.

AKINCANO M. WEBER is a Swiss Buddhist teacher and psychotherapist (MA). A former monk, he has lived and practiced for 20 years in European and Thai Forest monasteries. Particular interests are early Buddhist texts, stillness and contemplative psychology. He is guiding teacher of Atammaya Cologne, Germany, part of the CPP programme and of several Mindfulness teacher trainings and teaches meditation and Buddhist Psychology in secular and traditional contexts in Europe and overseas. www.akincano.net

The cost for this course is $139 – $189, and a place can be secured either by paying in full or by deposit, through the registration link below. A limited number of bursary places will also be available for this course.

We're sorry, but all tickets sales have ended because the event is expired.


Developed by The Tricycle Foundation, Tricycle is the leading independent journal of Buddhism in the West, with each course designed to provides a unique opportunity to engage with the te

achings and practice of Buddhism.